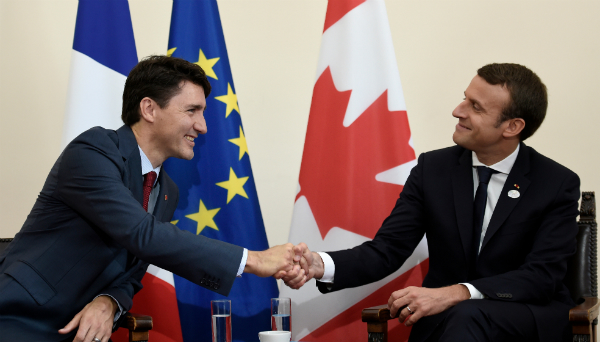 Similar in age and both telegenic, the leaders of Canada and France have formed a fast friendship. Some observers say Canadian Prime Minister Justin Trudeau and French President Emmanuel Macron need one another to face US President Donald Trump at events like the G20.

The G20’s two youngest leaders – Macron is 39, Trudeau 45 – have a lot in common. Both come from privileged backgrounds. Both were underestimated by their opponents because of their youth and both have proved that their adversaries do so at their own peril.

And then there is the common bond of the French language (Trudeau speaks fluent French) and culture. But there is more to the fledgling friendship that started at the G7 summit in Taormina, Sicily. And there are differences. While Trudeau is left-leaning, Macron espouses a centrist approach, grabbing policies from both left and right.

Commentary in France has focused as much on the optics of the Macron-Trudeau relationship as on the two men’s similar outlook, especially after both leaders posted clips and pictures of their meeting in scenic Taormina on their Twitter accounts.

“Emmanuel Macron, who has picked up the ideas of an official photographer and locked-down communications, follows this example,” Klinnik wrote, adding: “But nobody has exploited it as much as the Canadian prime minister.”

In the end, Macron and Trudeau need each other for various political reasons, not least because of the volatile and unpredictable man who has come to occupy the White House – and with whom they will meet at the G20 summit in Hamburg on Friday and Saturday – said Ferry de Kerckhove, a former Canadian diplomat who’s advised several prime ministers.

“Important in the emerging relationship are not just the foundations – the Atlantic Alliance, the Comprehensive Economic and Trade Agreement (CETA), our common perspective on multilateralism – but, in the short and medium term, the fact that both leaders need one another to face the American president,” de Kerckhove told dpa. “One might even say to interpret together what the latest presidential tweet portends.”

Canada has a unique opportunity to be a bridge between Europe and the United States, said Joe Clark, a former Canadian prime minister and foreign affairs minister.

“There was a time when relations were unusually undeveloped between the United States and Europe, when NATO was first being formed, that Canada really was the Atlantic link,” Clark said, speaking to reporters on the sidelines of the recent International Economic Forum of the Americas in Montreal.

Part of Canada’s role then was to ensure that there were “no grievous misunderstandings” between the US and its new European allies.

Trudeau, who has managed to get along with President Donald Trump very well despite their ideological and policy differences, and festering trade disputes, might have to play that role once again.

In return, Trudeau may need to rely on France and Europe to provide Canada with some strategic depth or independence from the US, de Kerckhove said.

Just like German Chancellor Angela Merkel, who spoke of intractable differences between the US under Trump and Europe, Canada has been forced to conduct “an agonizing reappraisal” of its relationship with its largest trade and security partner, de Kerckhove said.

The Trump administration’s rejection of the Paris climate accord seems to have been one of the decisive factors in the Trudeau government’s decision to stake out a more independent foreign policy stance that is much more in line with the views of many Canadians critical of Trump’s policies on the environment, multilateralism and trade, de Kerckhove said.

“Our prime minister’s ‘European diplomacy’ – Italy, Germany, France, Belgium, etcetera – has been quite remarkable: we need CETA ratified, and President Macron, as a committed Europeanist, is a key ally in the process,” de Kerckhove said.

The two countries also cooperate in La Francophonie, the organization of French-speaking states.

“Of course, there is a total unity of purpose when it comes to climate change on which France and Canada are essential partners,” de Kerckhove said.

There is also strong cooperation with Europe and France on the issue of combatting terrorism. Canada and France also cooperate fully in the fight against the so-called Islamic State in Iraq and Syria, de Kerckhove said.

Many people forget that France is a Pacific nation thanks to its territories in French Polynesia and New Caledonia. That means there is a big potential for cooperation between Paris and Ottawa in the Pacific.

“France, for its part, is very interested in the Arctic and therein lies another area of potential cooperation,” de Kerckhove said.
“Overall, on substance and mutual feelings of compatibility, these two younger men definitely have it.”