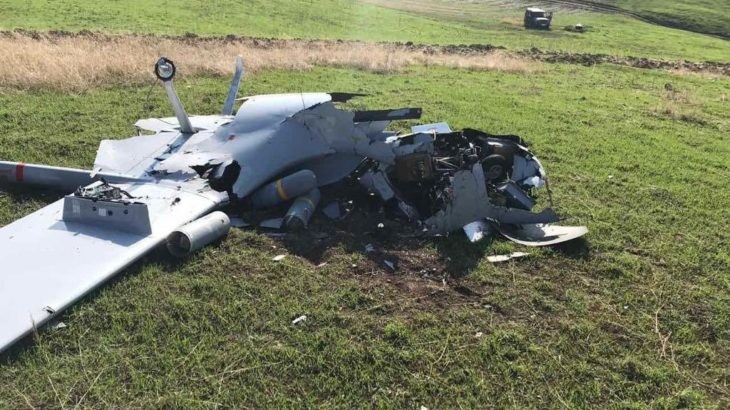 Pashinyan made the call a day after Armenian defence officials displayed what they claimed are parts of a Turkish combat drone and its Canadian-made optical and target acquisition systems.

A spokesperson for the Armenian Ministry of Defence said the Turkish Bayraktar TB2 drone was shot down by Armenian air defence units during fighting in Nagorno-Karabakh on Monday evening.

The WESCAM CMX-15D system was manufactured in June of this year and installed on the downed Bayraktar TB2 in September, said Shushan Stepanyan, spokesperson for the Armenian Defence Ministry.

Analysis of data from the device — which allows drone operators to designate targets on the ground and guide missiles and bombs to them — showed that it had operated for a total of 31 hours, Stepanyan said.

Fighting in the breakaway Nagorno-Karabakh region of Azerbaijan, which is populated by ethnic Armenians, began on Sept. 27. It’s the most significant outburst of violence since a Russian-brokered ceasefire paused hostilities in 1994.

Armenia has repeatedly accused Turkey of supplying Azerbaijan with arms — including drones and F-16 fighter jets — as well as military advisers and jihadist Syrian mercenaries taking part in the fighting.

Armenian officials also have accused Azerbaijan of using the Turkish drones to not only target military forces but also to conduct strikes against civilian infrastructure across Nagorno-Karabakh and in Armenia proper.

Turkey and Azerbaijan have denied these reports and have accused Armenia of shelling civilian areas near the frontline and in the country’s second largest city of Ganja.

Officials at Global Affairs Canada said they are investigating allegations regarding the possible use of Canadian technology in the Nagorno-Karabakh conflict and “will continue to assess the situation.”

While the investigation is ongoing, there will be no resumption of exports, officials said.

“We continue to call on both sides to refrain immediately from using force, to respect the ceasefire and protect civilians,” said a statement by Global Affairs.

Officials at the Turkish and Azerbaijani embassies did not respond to Radio Canada International’s request for comment on the latest report about the downed drone in time for publication.

However, in an interview with CBC News Network’s Power & Politics on Oct. 6, Turkey’s Ambassador to Canada Kerim Uras would neither confirm nor deny the presence of Turkish drones in Azerbaijan.

“I would make the case that drones, by pinpoint targeting the aggressor, are actually upholding human rights,” Uras told Power & Politics, adding that Canada’s decision to suspend exports to Turkey was “unjustified.”

“We think it’s surprising … it’s hasty, it’s not in line with an allied spirit and it amounts to rewarding the aggressor,” he said.

Kelsey Gallagher is a researcher with the disarmament group Project Ploughshares who has studied Canadian exports of drone technology to Turkey. He said that while it’s not clear where exactly the drone was shot down, he has no doubt that the device presented by the Armenian military was a Canadian-made WESCAM CMX-15D system.

“This is the clearest footage we have of one of them downed anywhere,” Gallagher said. “We’ve seen Turkey export the [Bayaraktar] TB2s to Libya, certainly, in breach of the UN arms embargo, to their allies there. And we’ve seen them begin to start selling them to other countries, so it would make sense that they would send them to Azerbaijan.”

Diverting these drones to Azerbaijan without getting Canada’s permission would be illegal, Gallagher said.

Whenever a Canadian weapons system is exported abroad, it has to get an export permit approved by Global Affairs Canada — and that export permit must specify who the intended recipient is and what that weapon system would be used for, he said.

Gallagher said these WESCAM optics and target acquisition systems have been exported to Turkey in “high volumes” since 2017 but there is no indication that they were exported to Azerbaijan.

Foreign Affairs Minister Francois-Philippe Champagne has suspended the export licence for WESCAM’s exports to Turkey pending the outcome of the investigation into whether these devices were used by Azerbaijan in fighting against Armenian forces in Nagorno-Karabakh.

Speaking to reporters on Friday at the conclusion of his European tour — where he discussed the Nagorno-Karabakh war and Turkey’s tensions with Greece in the Eastern Mediterranean with EU and NATO allies — Champagne said he was very firm with his Turkish counterpart Mevlut Cavusoglu.

“I think in my discussion with the foreign minister of Turkey I was very clear about the legal framework that exists in Canada when it comes to the export control regime, that Canada was party to the Arms Trade Treaty, that human rights are a core component under our legislation and I would abide by the spirit and the letter of the law,” he said.