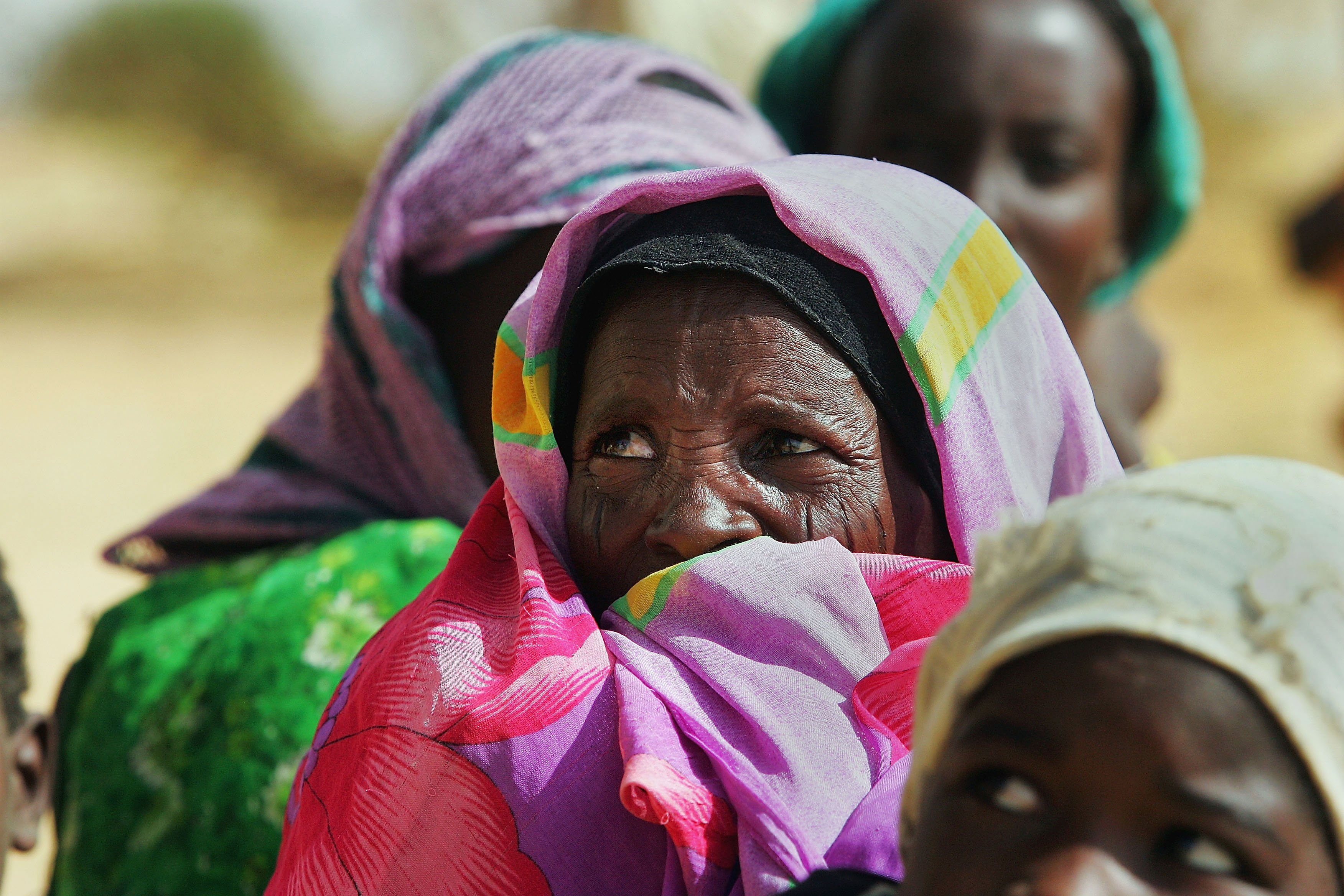 Hawa Bashi was sure that her son, Hari, would die soon.

An emaciated two-year-old with the resigned gaze of a life-weary elder, Hari had lost his appetite. Even worse, he seemed to have lost the will to live.

His bone-thin legs could no longer hold him up; his mother had to hold him as Hari sat slumped under the shade of a thorny tree near the village of Shegek Karo.

Bashi’s own village, Bashimi, just a few kilometres from here, had been bombed, looted and burned in the summer of 2003 by the Sudanese army and the mounted Janjaweed militia, which the government of Sudan has employed to fight a more-than-two-year-old rebellion in Darfur.

My friend Richard Butler, a lanky, cigar-puffing combat photographer, and I had crossed into Darfur from neighbouring Chad. Riding with a group of rebels atop a battered Toyota pick-up truck – with a heavy machine gun mounted in the back, another machine gun on the hood and a loaded grenade launcher dangling from the passenger side mirror – we drove deep inside rebel-held areas to report on what the United Nations has called the biggest humanitarian crisis in Africa.

The World Health Organization estimates that between March and October 2004, about 70,000 Darfuris died of disease and malnutrition in camps, and forecasts that between 6,000 and 10,000 would die every month. This figure doesn’t include those killed in attacks and massacres perpetrated by government forces and the Janjaweed.

The number of dead may in fact be 250,000 to 300,000. In addition, about 1.8 million have been driven from their homes as a result of the government campaign to suppress the rebellion. The United States has accused the government of Sudan of carrying out genocide.

Most Darfuris I spoke to believe the Arab-dominated government in Khartoum is using the rebellion as an excuse to embark on an ethnic cleansing campaign. They say the government wants to drive the sedentary African population out and settle the France-size area with nomadic Arab tribes from neighbouring Chad, Central African Republic, Mali and Niger.

Even though, Bashimi and much of Northern Darfur countryside is now under the tenuous control of the Sudanese Liberation Army (SLA) and other rebel groups, Hawa Bashi and hundreds of thousands of other women and children are too terrified of government forces and their Arab Janjaweed allies to return to their villages. They have scattered around the countryside, in the desert and the rocky hills, making new “homes” in the shade of trees locals call katera.

But this survival strategy has been slowly killing the weakest: small children and the elderly.

I fished out a fistful of dried Sudanese dates from my cargo pants. The sweet, nutritious dates had sustained me during our long treks through the desert. I hoped they might keep Hari alive for a few days, maybe long enough for the long promised humanitarian aide to finally reach this godforsaken place.

Hari looked disapprovingly at the date, then, after some encouraging murmurs from his mom, Hari put the date in his mouth and sucked on it. A spark of curiosity lit his infected eyes but a moment later he lost interest in the date and dropped it in the sand.

Nearby, Hari’s two older sisters blew at the ambers under a cauldron that held the family’s first real meal in a week. Earlier in the day the SLA soldiers stationed on the hill overlooking the dry riverbed had taken pity on Bashi and the dozens of families from Bashimi who had taken shelter under the katera trees. They had distributed a quarter sack of corn flour to each displaced family. Now, Bashi’s daughters were busy making the go, a paste of corn or millet flour, which the locals eat with a spicy sauce called sami, made of wild, olive-sized onions.

The SLA handout couldn’t have come at a better time: Bashi was down just to a fistful of makhet, a pea-like fruit that people in the region eat in times of hunger. This wonder-food, which grows on bushlike desert trees, has to be soaked in water for three days before it loses its bitterness and becomes edible.

Hari hated makhet, Bashi said, squatting besides her wasting son. Even Hari’s older siblings couldn’t take it anymore. “They dream about milk and yoghurt with sugar,” Hawa said. “But all our cattle were taken away when the army attacked our village. I have only a donkey to carry water.”

Under the terms of the ceasefire negotiated in Chad between the rebels and the Sudanese government in April 2004, government forces were supposed to allow humanitarian assistance into the rebel-held territories. The international community has rallied its resources to help people of Darfur. Canada has contributed $40 million and has promised much more, and a number of Canadian non-governmental organizations – CARE Canada, Oxfam Canada, World Vision Canada and others – are on the frontlines of the relief effort, while the Canadian Forces have donated $1.4 million worth of equipment and supplies to the African Union peacekeepers in Darfur.

While the government in Khartoum has allowed international aid agencies to operate in the areas of Darfur under its control, the displaced population of the rebel-held countryside has received only sporadic shipments of food and medication. Water is another problem.

Medine Muru Gani, 13, and Salwa Jukunda Mahmud, 11, must walk an entire day to get to wells in the village of Farawieh while their families still hide in the desert. Once a bustling village of 3,000 inhabitants, with a market, a high school and a one-room infirmary, Farawieh became a ghost town after it was attacked by government forces in January 2004. Five of the village’s seven wells were unusable, one destroyed by a bomb and four poisoned by Sudanese soldiers who dumped corpses and animal carcasses into them. A 250-killogram unexploded bomb, with Russian markings clearly visible on its fat gray body, lay on the sand near one of the two functioning wells.

“It’s not so bad now,” said Medine, tying up the mouth of a 30-litre goatskin filled with water. It was far more dangerous when Sudanese soldiers were still in the village. “We had to sneak in at night past their sentries to fetch water.”

Nouren Ahmad Omar, the village school principal, who translated our conversation, looked with pride at his former pupils. “They are very brave girls,” Mr. Omar said. “If the soldiers or the Janjaweed caught them, God knows what they’d do. We know of eight-year-old girls raped by soldiers.”

In their tattered dresses, Medine and Salwa strained to lift heavy water skins and hook them on to the donkey saddles. None of the men moved a finger to help them. Fetching water is a girl’s job.

So is sneaking into government-controlled cities to buy food. Muhammad Abdurahim Ishag, a stocky, muscular man who looked 20 years fitter than his 65, said he had no choice but to send his womenfolk to cities. His four wives and 26 children had even run out of makhet, Ishag said. “The government doesn’t allow any food to leave the cities, so our friends smuggle out food and sell it to us outside.” He bowed his head in silent shame when asked what happens to women who run into Sudanese soldiers or Janjaweed.

Men can’t go near the cities, explained Suleiman Jamous, the humanitarian co-ordinator for the Sudan Liberation Movement, the political arm of the SLA. “They’ll get slaughtered by the Janjaweed”

Ishag said dozens of men and women were killed by Sudanese soldiers and the Janjaweed when they attacked and destroyed his village, Tangarara. “The Janjaweed who burned our village said there was no place for Noubians,” Ishag said, using the derogatory term for Black Africans used by the Arab Janjaweed. “They shouted, ‘Kill the Nubians!’” Ishag gathered his family, rounded up some donkeys to carry water and food, and ran. When he emerged from hiding the next day, his village was still smoldering, bodies of massacred villagers strewn all over.

“Two bodies were so badly mutilated that we couldn’t carry them to a grave,” Ishag said. “We just dug a shallow pit and buried the remains there.”

He led us to the burial site, picked up a stick and started poking the soil beneath our feet. A human jaw with a set of healthy white teeth appeared from the sand, then the phalanges of somebody’s fingers. Relations between the Black Africans and their Arab nomad neighbours weren’t always hostile. “Before this war we were living peacefully,” Ishag said, pointing to a ransacked Arab village on the other side of the oasis. The abandoned Arab village – a few flimsy houses built from woven branches, like giant baskets – stood as a silent, withering reminder that not so long ago both communities co-existed, depending on each other for survival in this harsh environment.

“They lived with us for up to six months a year; we shared everything,” Ishag said. “They even married our girls. And whenever there were quarrels between us, our umda [mayor] and their umda would get together and resolve the matter. But now they want to take over our land.”

I saw Hawa again on my way back to Chad. Looking from the same hilltop rebel position in Shegek Karo, where we stopped for the night, I could make out her silhouette in the dying light of the short African evening. Later a heavy rain fell and we – a group of Western reporters and human rights activists – huddled together to keep warm under a large plastic tarpaulin. I couldn’t stop thinking about Bashi in her air-light floral pattern sarong.

In the morning, as we hang our soaked clothing and sleeping bags out to dry, I told The Washington Post Africa correspondent, Emily Wax, about the women and children of Bashimi in the valley below. I didn’t have the heart to go there myself and face Bashi’s grief. Wax took Ismail Haggar, the village teacher who had translated for me, and descended into the valley.

They emerged an hour later, bearing good news. Hari was still alive and was eating again. Apparently, he’d taken quite a liking to dates, Haggar told me with a smile.