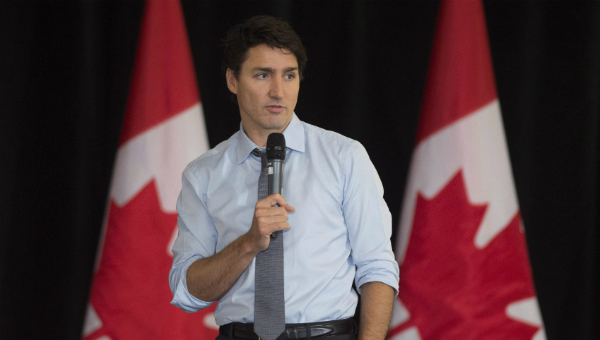 Trade is likely to top the agenda when Justin Trudeau meets Donald Trump for the first time on Monday, with the Canadian premier also under pressure to stand up to the new US president on immigration and human rights.

Montreal (dpa) – When Canadian Prime Minister Justin Trudeau steps off his plane in Washington on Monday for his first meeting with President Donald Trump, he’ll need to marshal every ounce of his considerable charm to win over his new southern neighbour.

He might also need to fall back on the skills he honed in the boxing ring to prove that despite the obvious difference in political weight categories, he’s no pushover.

At stake are Canada’s economic prosperity and its all-important security relationship with Washington.

“I’m counting to have a good working relationship with the president,” Trudeau said Friday during a town hall meeting in Yellowknife, in the Northwest Territories.

“We’re going to talk about all sorts of things we align on like jobs and economic growth, opportunities for the middle class; the fact that millions of good jobs on both sides of our border depend on smooth flow of goods and services across that border.”

Trudeau said they would also discuss things they disagree on, perhaps a reference to Trump’s January 27 order, now blocked by a court, which suspended the US refugee programme, banned Syrian refugees indefinitely and temporarily banned travellers from Muslim countries.

The day after the order was signed Trudeau tweeted a picture of himself welcoming a Syrian girl at Toronto airport and told refugees to come to Canada, which “will welcome you, regardless of your faith.”

On Friday, he added: “Canada will always stay true to the values that have made us this extraordinary country.”

The United States is Canada’s biggest trading partner, with about 2 billion dollars of trade crossing the border between the two countries every day.

Ottawa and Washington are not only founding members of NATO but also share bilateral defence ties, chief among them the bi-national North American Aerospace Defence Command.

While Trump’s advisors have tried to reassure Trudeau that Canada doesn’t have “much to worry” about, the US president’s bellicose rhetoric on trade and the protectionist “America First” sentiment he espouses make many in Ottawa very nervous.

With more than 75 per cent of Canadian exports going to the US Trudeau needs to safeguard Canada’s privileged access to the US market.

Trudeau’s advisers expect the North American Free Trade Agreement (NAFTA) between Canada, US and Mexico to feature prominently in his discussions with Trump.

While most of Trump’s attacks on NAFTA have been directed at Mexico, there are also longstanding trade disputes – notably the softwood lumber and Canada’s protected dairy and poultry industries – between the two neighbours that could fester and poison the relationship between Ottawa and Washington.

At the same time Trudeau is facing domestic pressure to be firm with Trump. A recent poll conducted for The Globe and Mail shows 58 per cent of Canadians expect him to stand up to Trump’s “America First” strategy even if it leads to a trade war.

Trudeau is also facing pressure from his own political base to stand up to Trump on issues such as immigration and human rights.

During a visit to the Arctic territory of Nunavut Thursday, Trudeau was asked whether he would raise the controversial US travel ban with Trump.

“As everyone in Canada knows, I have two important responsibilities that stand out in the way we engage our neighbours to the south. The first is, of course, to highlight Canadian values and principles and the things that keep our country strong,” he said.

“The second responsibility that I have, which we will very much be engaged in, is creating jobs and opportunity for Canadian citizens through the continued close integration on both sides of the border.”